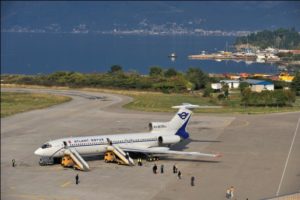 On 23rd of April 2003, the ownership of Tivat Airport was transferred from  JAT to the Public Institution “Airports of Montenegro“. Since then, the Airport started the first phase of its accelerated modernization, which was finalized by reconstructing and expanding terminal building to 4057m². This was followed by finalization and equipping for airport use in night conditions.

Tivat Airport is characteristic due to the fact that more than 80% of the traffic is performed during summer tourist season, with a very distinctive peak loads (for example on 12th of July 2006, the airport handled 9138 passengers).