On 5th of May 1930, at 10 o’clock and 45 minutes, the first passenger aircraft landed in Podgorica. Podgorica was celebrating. A few thousand citizens of Podgorica and the surrounding villages awaited with curiosity, as the reporters wrote, “the engine bird”, and they gave unprecedented ovations. In the aircraft type “Farman” with nine seats, in addition to Sondermajer and pilot Striževski, ”the main organizer of the Company”, there were also five journalists, collaborators of Belgrade newspapers. On that occasion, the president of Podgorica Municipality has presented the pilot with 10 napoleons, and Sondermajer with the gold Montenegrin national costume. 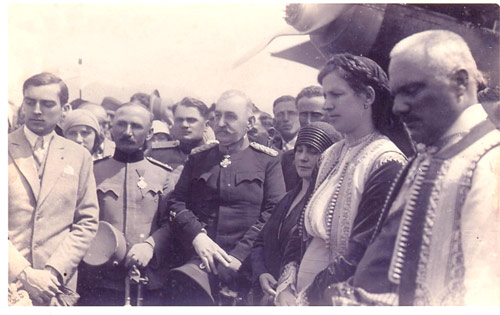 Among other things, the Montenegrin press wrote the following about this event:

“…the passenger aircraft departed from Belgrade at 7 o’clock. It arrived in Sarajevo at 8 o’clock and 33 minutes. After an interval of half an hour, the aeroplane departed from Sarajevo to Podgorica where it arrived at 10 o‘clock and 45 minutes. The aeroplane landed on the field itself above old town…The club “Branko” sang the anthem, and then the guests could help themselves to a banquet in the hotel “Imperijal”. The aeroplane shall operate twice a week: on Mondays and Thursdays, and the price is 850 dinar. ”  (Slobodna Misao, 11th of May 1930)