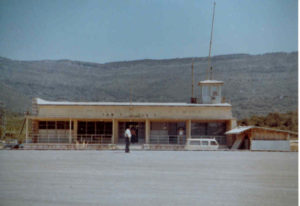 Airport Tivat was built after the Second World War by levelling the grassy flying paths intended for military and civilian parachutists’ training, as well as for parachuting competitions. After the airport located in a location with favorable climatic and meteorological conditions was arranged, it could hold, apart from sport aircraft, the transport two-engine Douglas C-47, which could land and take-off from provisional airports. Since the civilian variant of that aircraft, the DC-3, had been used in domestic traffic, the terrain was also furnished and equipped for handling (landing and take-off) of passenger aircraft with the features of the category “Douglas” belonged to. The grass path, 1.300m long and 60m wide, was cleaned and adapted.